Walioitwa Kwenye Interview Mbulu Town Council | List of candidates shortlisted for the interview at Mbulu: Mbulu also (known as Imboru among the Iraqw speakers) is the town in Northern Tanzania. The town is the core of minority cushitic speakers (iraqw people) in Tanzania. The town was founded by Germans in 1907 when they colonizes former German East Africa (Tanganyika, Burundi and Rwanda). Mbulu climate favoured Germans, also the hospitality of the indigenous favoured them. Germans were less harsh to the Iraqw people than the rest Tanganyikans. Thus Iraqw were used by Germans on white collar jobs.

Today most Afro-German with Tanzanian ancestry are Iraqw from Mbulu. The main economic activities in Mbulu are Agriculture and Trade. Mbulu area is one of the earliest Wheat growing Plantations. During the British regime, Mbulu peasants were able to form trade union, Particularly Mbulu Wheat Growers association (1923).

Refer toMbulu Town Council Announcement for the vacancy of Village Executive Grade III (position 24) and Driver Grade II (position 2) with ref. Na. MTC / TD / FI / 19/10 dated 25/05/2022, The Mbulu Town Council announce to all applicants whose list is attached and who have been found to meet the criteria and qualifications among all applicants in accordance with our above vacancy announcement. interviews to be conducted as follows; 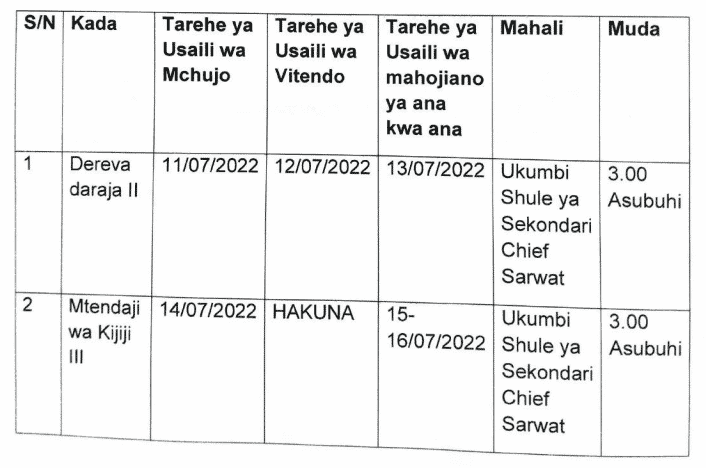 In addition the respondents shortlisted for the interview should adhere to the following instructions: