It is a well-known fact that the Tanzania Premier League or NBC Premier league has been a two-horse race or a three-horse race since the emergence of Yanga (Young Africans) and Simba Sc as a powerhouse in the last decade along with Azam Sports Club which was founded on July 23, 2004. But the teams who fall in the so-called lower rungs of the league Table also produce some exciting football that you may not want to miss as a fan of NBC Premier league.

Mechi Ya Watani Wa Jadi (Yanga Sc vs Simba Sc) or the Kariakoo Derby is undoubtedly the big-ticket clashes in the Tanzania NBC Premier League but there are some exciting rivalries and derbies which involve other clubs as well.

Anyone who has experienced a Kariakoo Derby will have seen how much competition there is between the two teams ( Yanga Vs Simba), how much adrenaline starts pumping to all football fan, This battle between Simba and Yanga is surely one of the most waited fixture and emotinal game in NBC premier league. Here we’ll take look on how Simba Sc will lineup as they face their all time Yanga Sc. 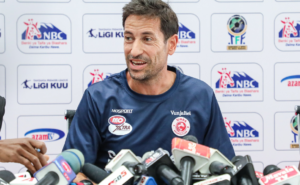 Pablo Franco Words Ahead Of Today clash Vs Yanga Sc
Despite the huge difference in points between us and the league leaders towards tomorrow’s Derby game against Yanga, Head Coach Pablo Franco has said his squad does not have any pressure.

Pablo said “we have the best players in the squad who have played so many games of this nature so there will be no difference.

Pablo added that as a big team you are happy to play a big match as well as tomorrow so we are ready for the fight. Commenting on the game, Pablo said it would be tough but we are prepared to make sure we get three points to reduce the difference and put pressure on the leaders.